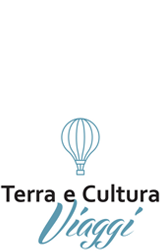 The specialist of the journey in Sicily

“Here, everything is perfect.” These were the words written by Virginia Woolf during her trip to Sicily.

This wildly beautiful island of fire offers travellers an intoxicating mixture of culture, nature and a lifestyle like no other in the world, providing an experience to remember.

Terra e Cultura Viaggi gives you the opportunity to:

Which includes seven UNESCO World Heritage Sites: the Sicilian baroque towns of Val di Noto; the valley of the temples of Agrigente, Syracuse and the Necropolis of Pantalica; the Villa Romana del Casale; Mount Etna; the Arab-Norman route between Palermo, Monreale and Cefalù; and the Aeolian Islands.

Learn all about its fascinating history

As a unique melting pot of civilisations stretching back thousands of years, from caves adorned with important examples of ancient art to the architectural wonders of its marvellous churches and Sicilian baroque palaces, via Greek temples and theatres. You will be exploring a land which, for centuries, attracted kings, barbarians, conquerors and travellers from across the globe, including Phoenicians, Romans, Moors, Normans and members of the French Bourbon aristocracy, who all left an artistic and cultural mark that bears witness to a remarkable fusion of Eastern and Western influences.

Immerse yourself in a beautiful natural world

Five tiny island archipelagos, four major natural parks and more than 77 protected nature reserves will all inspire you to enjoy the great outdoors. We organise walking holidays in Sicily as well as scuba- diving and sailing excursions and horse-riding tours. Or why not explore Sicily by bike whilst taking in beautiful Mediterranean landscapes which lead you all the way down to the seashore? Another way to enjoy the island’s landscapes is a golf holiday. Sicily has many golf courses and golf resorts snaking up lush green hillsides.

Discover the island’s culinary heritage and wine culture, which both make good use of local produce, from the land and sea on a food and wine holiday. Sample wines from the region’s finest cellars, such as Donna Fugata, Florio and Marsala, or take part in a Sicily food tour where you can treat yourself to culinary specialties, including panelle, arancine and pane ca meusa, as well as classic desserts like cannoli and cassata – and real foodies won’t be able to resist some delicious Modica chocolate.

or on beaches and coves that feature among Europe’s most beautiful, including marvels of the island coastine such as Bue Marino, Tonnarella dell’Uzzo in Zingaro nature reserve, Capo Bianco or Rabbit Beach.

Transform your trip into an experience like no other!

Organising your holiday in Sicily so that you are totally free to enjoy the local lifestyle. We do this by designing an ideal solution tailored to your preferences.

All the following options are possible:

You also get all the benefits of our concierge service whichever option you choose, as well as 24-hour assistance.